Plasma is more than just a component of blood - it’s the basis for some of the world’s most critical lifesaving medicines. The medicines developed from plasma can provide better treatment and improved quality of life for patients who need emergency or preventive medicine. Plasma medicines are  used by patients with chronic, rare diseases including primary immunodeficiencies, bleeding disorders, or those dealing with conditions like hepatitis, animal bites, septic shock and liver disease.

At Grifols, we understand the tremendous potential of plasma to help people. Increasingly more patients are being treated with plasma medicines. Together, with your donations and our medications produced from your plasma, we can improve the lives of people, including those who live and work in your community.

Plasma is the liquid portion of your blood that contains water, salts, enzymes, antibodies and other proteins that help our bodies function. It’s the single largest component (about 55%) of human blood and is what remains after red blood cells, white blood cells, platelets and other cellular components are removed.

Donating plasma isn’t like donating whole blood. When you donate plasma, a safe process called plasmapheresis (pronounced PLAZ-mah fair-EE-sis) separates plasma from the rest of your blood. While it can take up to eight weeks to recover from a whole blood donation, your body quickly and easily replaces the donated plasma within 48 hours. As a result, you can safely donate plasma twice in a week, with donatons two days apart from each other. Grifols uses your plasma donations to develop medicines that help save and improve lives. 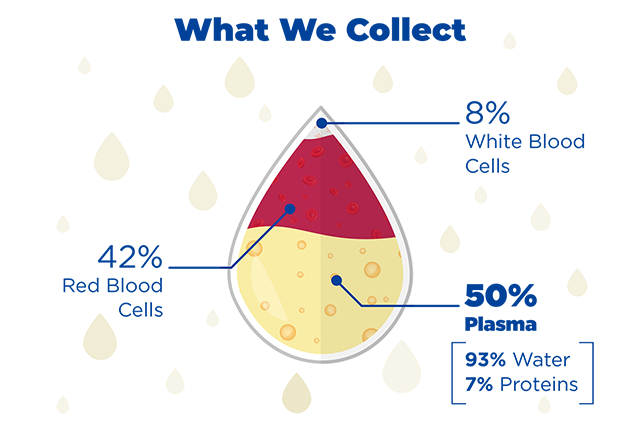 Plasma medicines can take up to 12 months to create due to the long, complex and highly regulated process necessary to produce high-quality and safe therapies.

Grifols manages every step of the process, from plasma collection to the production of plasma-medicines. This allows us to safeguard the health and well-being of our donors, as well as the safety and quality of the plasma that goes into these life-changing medicines.

Breakdown of plasma. Plasma is 93% water and only 7% proteins.

Get the inside info on Grifols plasma donation.